Just getting started with planning?

Tell us a bit about your Buddhist Wedding Ideas and we can send you information tailored to your needs.

Buddhism is the world’s fourth-largest religion, and the sixth-largest in the UK. However, it has little of the structure and doctrine of most religions, being rather a way of guiding each individual on their spiritual path.

This extends to Buddhist wedding ceremonies. While the Buddha encouraged his followers to marry as a way of learning about the interconnectedness of all things, he didn’t ordain it as a sacred rite. Though it normally involves prayers and a blessing, a Buddhist wedding can be celebrated anywhere — including a luxury Arabian tent.

A Buddhist wedding is predominantly secular, following the laws of the country where it’s held. In the UK, this means it’s a civil ceremony held by a registrar, usually with the addition of a Buddhist blessing, though this can take place later in a temple.

The most important aspect is that it’s a partnership of equals based on a deep mutual respect. The marriage should be a harmonious blend of male and female strengths. Since there’s no official “membership” of Buddhism, it’s not even necessary for both partners to identify as Buddhist, and all guests are welcome, as long as they respect the customs and beliefs

Beyond this, what happens at a Buddhist wedding is generally based on culture more than religion. The majority of the world’s Buddhists originate from southern and eastern Asia, but many westerners have embraced the faith. A couple whose culture derives from Sri Lanka, China or Thailand are likely to have very different cultural requirements, while ethnically British Buddhists may prefer a largely standard British style of wedding.

Arabian Tents for a Buddhist Wedding

Since few Buddhist temples are registered for marriages, the civil ceremony has to be held elsewhere. The blessing may be combined with this or it may take place later in a temple. Like most types of wedding, it can be enhanced by being held in a luxury Arabian tent, especially in the grounds of a registered hotel or castle, so ceremony and reception can be combined.

The choice of tent will depend strongly on cultural and personal tastes, but couples wanting to evoke a rich, eastern feel could go for the Arabian Marquee. Its sumptuous bohemian patchwork, with red predominating, is adorned with mirrors to give a dazzling, exotic feel.

Alternatively, the Raj Marquee evokes a more restrained atmosphere, with the elegance of its navy and cream arch patterns and ornate block printing. Its Indian-inspired grandeur is nevertheless a little more relaxed.

Or you may prefer the simplicity of our Pearl tents, luxury white canvas marquees with a stylish veranda that creates an “inside-outside” feel, making it ideal for venues with a view to enjoy. The standing capacity is around 350 people, while the main structure can seat 240 people purely as a dining tent. Alternatively, it can take around the same number with added extensions, offering extra space for a dance floor, bar area and lounge seating.

Using the Tent for Your Buddhist Wedding

What you’ll need for your Buddhist wedding will depend both on what traditions you choose to follow and whether you’re celebrating the civil ceremony, the Buddhist blessing or just the reception. For either type of ceremony, a dais will be useful, which can be supplied as part of the flooring.

For most Buddhist traditions, a feast is central to the day, and we can supply either Western banqueting furniture or floor level and ottoman seating. The catering will be crucial, of course, and we can provide suggestions for excellent caterers who specialise in a variety of cultures. Alternatively, you may want to lay on a creative vegetarian feast, in accordance with the Buddha’s teaching on respecting all living creatures.

Music and dancing are important, too, whether you prefer the traditions of your culture or just a live band or DJ. Space for musicians and dancers, as well as a bar, can be made either by clearing away the banqueting furniture or by adding extensions to the tent.

Eating, drinking and dancing are important for a Buddhist wedding, but the religion is founded on the calm of mediation, cultivating wisdom, loving-kindness and compassion. It would be good, therefore, to have a quiet area set aside for guests who want to take some time out to meditate. This could be a screened-off area of the main tent, and we can supply various wooden or fabric screens for this.

Alternatively, a perfect solutions would be to have a small separate tent, such as our Mini Pearl, dedicated to quietness. If the weather promises to be fine, you may also want to dress the setting, such as with our Outdoor Light Garden, to encourage guests to seek the quiet of outdoors.

Holding any wedding in a luxury Arabian tent can make it that much more special, and the flexibility of a Buddhist wedding makes it particularly suitable. Get in touch with us to find out how we can help you start out on your harmonious union. 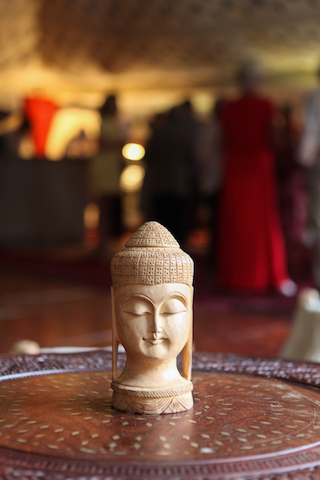 Fill in a few details opposite and we will get back to you as soon as possible with an accurate quote.

We aim to respond to all enquiries within 24 hours.