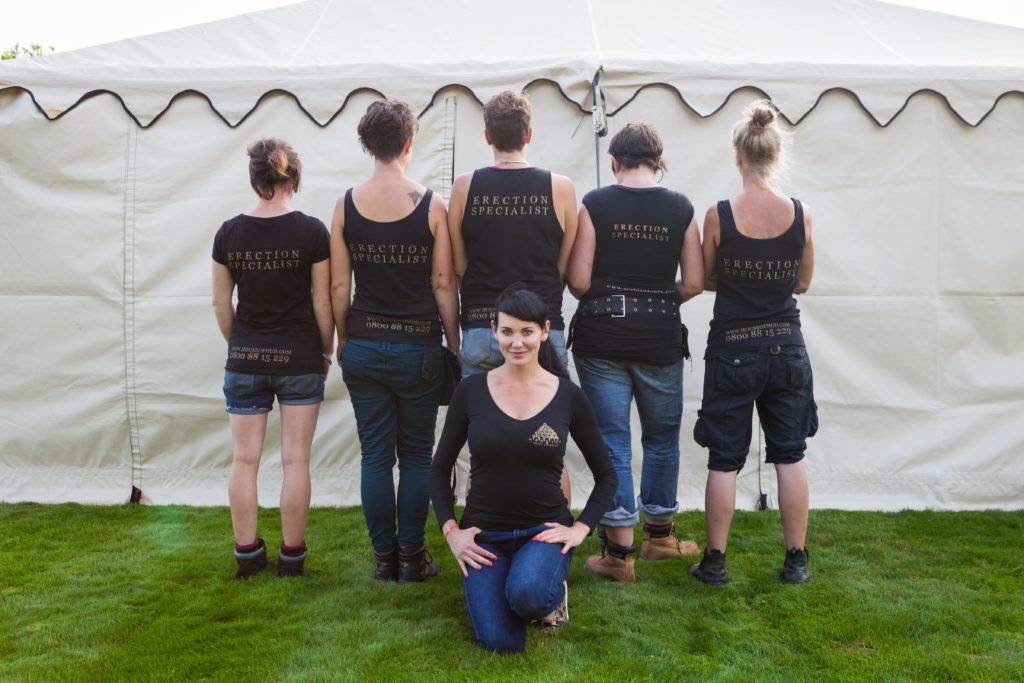 But, unusually it won’t just be a crew of lads that arrive with sledge-hammers, tool-belts and string vests to set-up The Arabian Tent Company’s range of tents, wedding marquees, themed interiors, props and furniture – you’ll find a perfectly balanced group of both Men and Women who have been basking in gender equality for years... 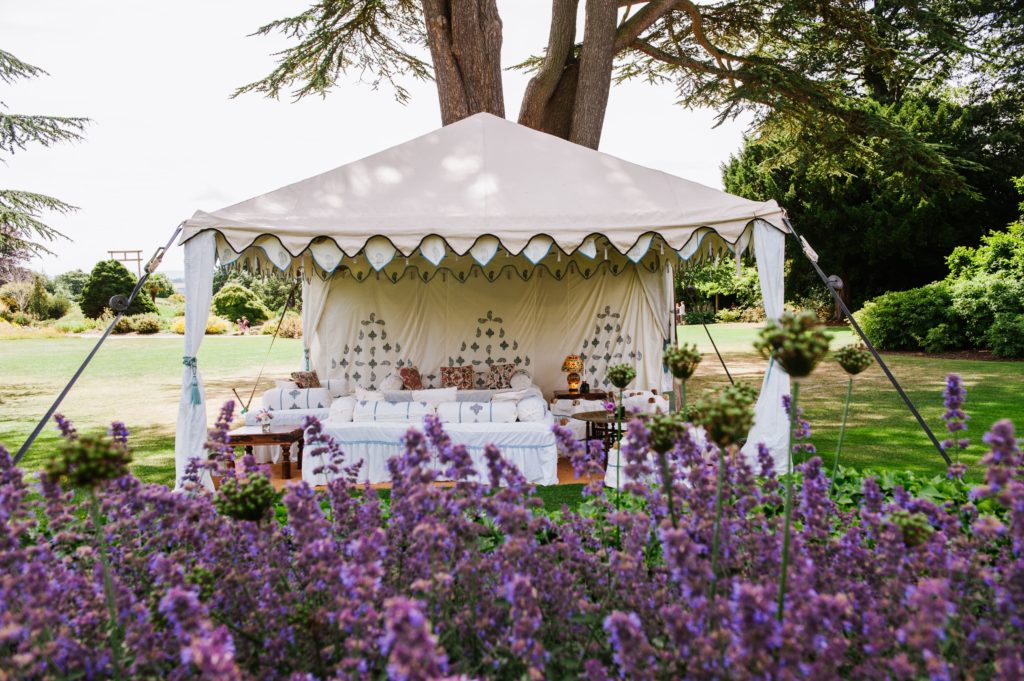 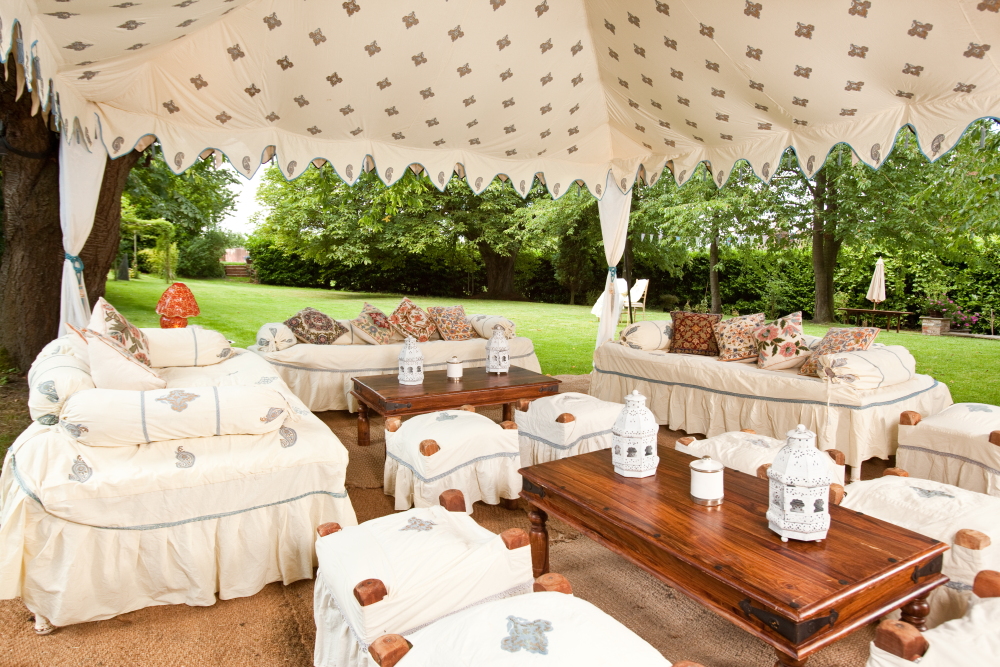 These sumptuous creations require brawn, brains, as well as technological and creative flair to conjure up magical wonderlands in venues that range from gardens in the home counties to fields in the Scottish highlands. As Team Leader and one of ATC’s female crew members, Lushka Mengham, says: “It's kind of like a removals, event production, and interior design job all rolled into one.” 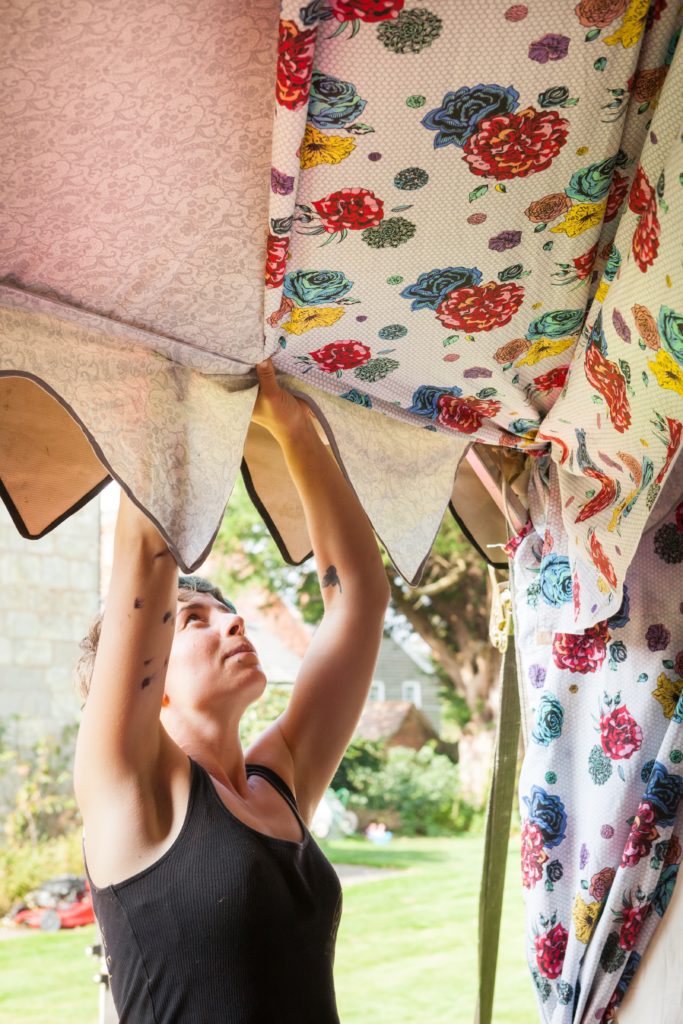 Skills required include physical strength and stamina during long days on the road, knowledge of building, roofing, flooring and general construction techniques, electrical know-how, the ability to work in a hard-working team, problem solving, and an eye for the detail and style of the furniture, draping, ornaments and accessories that all go into creating wedding marquees and ATC’s sumptuous interiors. Not to the mention the people skills required to soothe the jangling nerves of the bride’s mum.

“I was very much a tomboy when I was a kid, climbing trees, BMX biking, that sort of thing,” says Katherine Hudson, ATC’s founder. “So when I bought my first old Pakistani marquee, it never even crossed my mind that it wasn’t going to be me setting it up. And it’s been exactly the same with every other element of the business - driving vans, packing trucks, lifting heavy weights, whatever needs to be done - and if I can do it then so can other women too.”

In the past almost all construction jobs were part of a closed, men-only world. Not anymore. Around half of ATC’s rigging crew are women and an integral part of the team and the men on the crew are delighted to have the women involved when setting up party and wedding marquees. 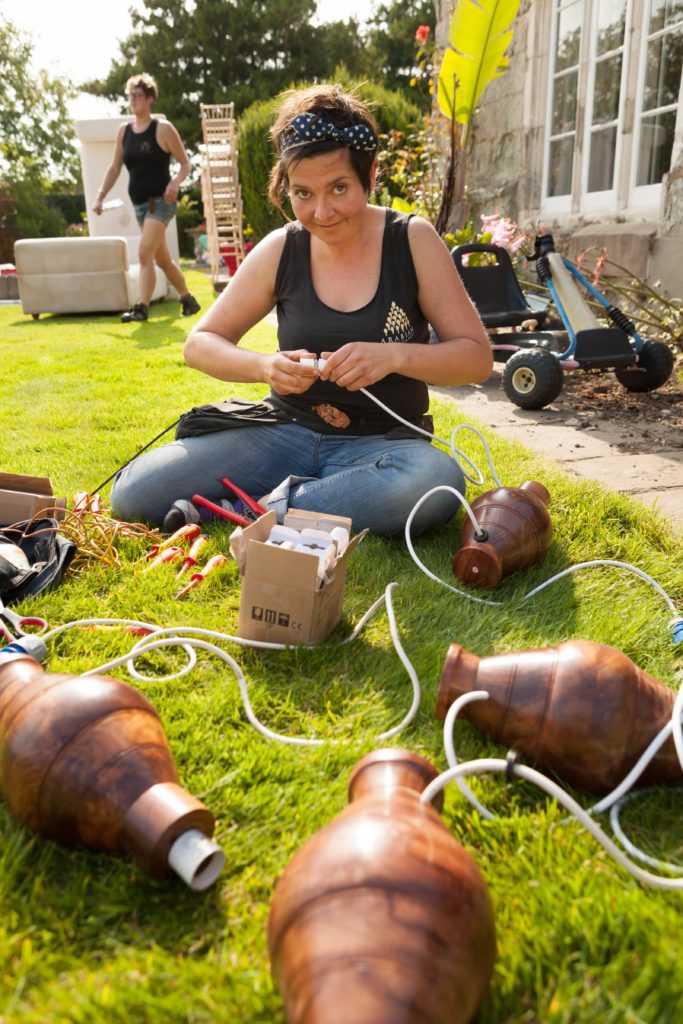 “It’s the fact that all our girls are equal to the men that matters.” says Operations Manager, Jennie Stogden. “So the guys respect the fact that they are perfectly capable of doing exactly the same job as them.”

Jennie has been pushing aside the boundaries of stereotypical roles all her working life with a degree in stage management which often took her to the main stages of music festivals. “I’ve never had an issue working in a boy’s environment,” she says. “Anyway, it’s not really down to gender, it’s the temperament of the people themselves, not whether you’re a boy or a girl that matters. In this job you just need to be a practical hard-worker and they come in both blue and pink flavour!”

“I find that women discuss more beforehand about the method of doing a job,” adds Katherine, “women want to be involved more in the decision making process. I also think women can be just as strong as men if they use their strength with a bit of thought…if they lift properly and work out the best methods for doing things.”

But are there any differences in the way women and men go about the job?

“Although everyone is different, women can be more perfectionist with finishing touches and tend to be more lateral thinkers,” says Jennie. “But at the same time they can quite often get distracted by discussing in-depth the best way to do something, whereas what is often quite handy with the men is that they single-mindedly just get on and get the job done. However, girls are very good at putting clients at their ease. Two of our women are team leaders, Grace and Lushka. They’re both incredibly good at reassuring nervous clients. Mothers of the bride are very good at winding themselves up into a tizzy and our team leader girls are very cool as well as being very physically fit.” 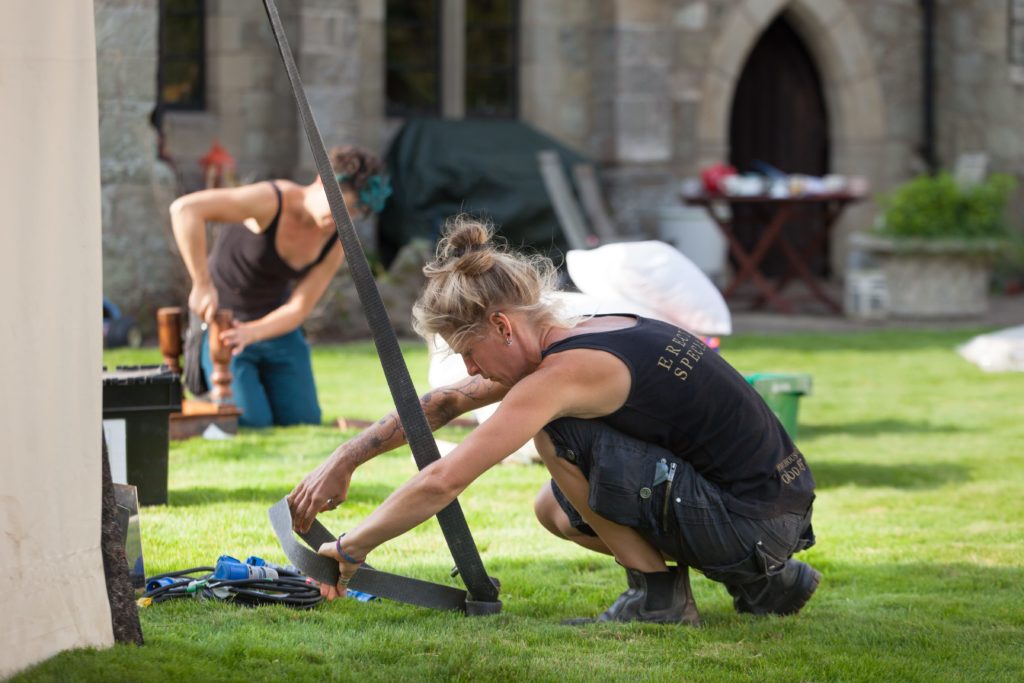 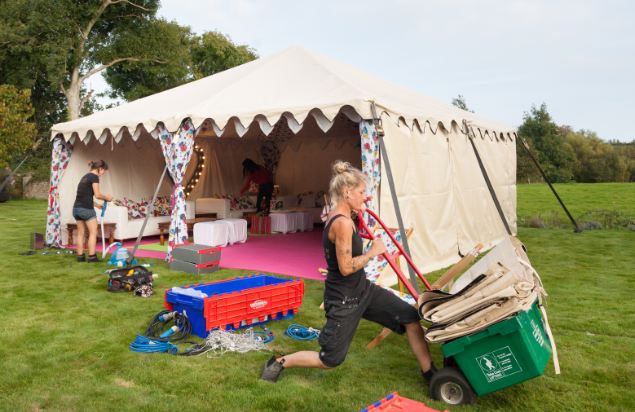 “Our clients on wedding jobs are often women and I think they like to see women in the crew,” agrees Leah Thomas, Electrician and HGV driver for ATC. “It’s very reassuring for them as they often feel we have a shared sense of style and an eye for detail. That’s not to say the boys don’t have too, because they do, it’s just a perception thing more than anything else, but it certainly helps. Women can also bring a sense of calmness to the team. Some days we get quite emotional but it’s best to have a hug rather than an argument with someone. Having both men and women on a team helps create a great team spirit and we’re all very upbeat people.”

So what’s the final score? Is it three cheers for the girls and two cheers for the boys? Let Lushka Mengham have the last word: “I've thought hard about this and it's my personal opinion that there is no desirable or undesirable trait that isn't demonstrated by both sexes, be that height, strength, attitude, graft, technique or initiative. As long as you care then you're gold.”

If you are interested in any of our party or wedding marquees, or would just like to say hello, please get in touch with us! 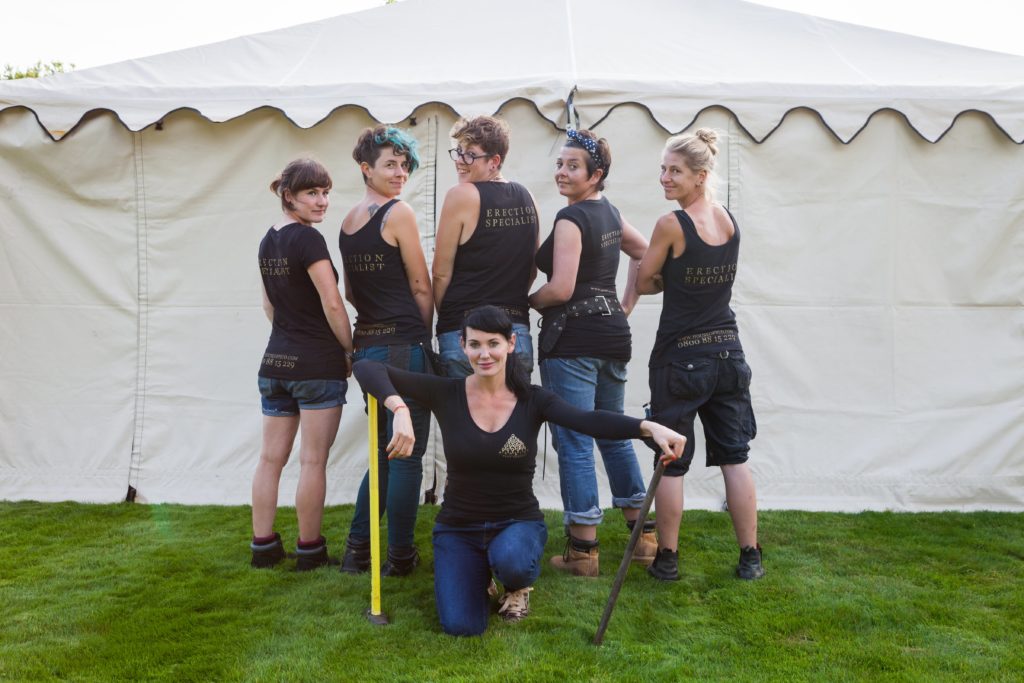 “Having both men and women on a team creates a great team spirit and we’re all very upbeat people.”