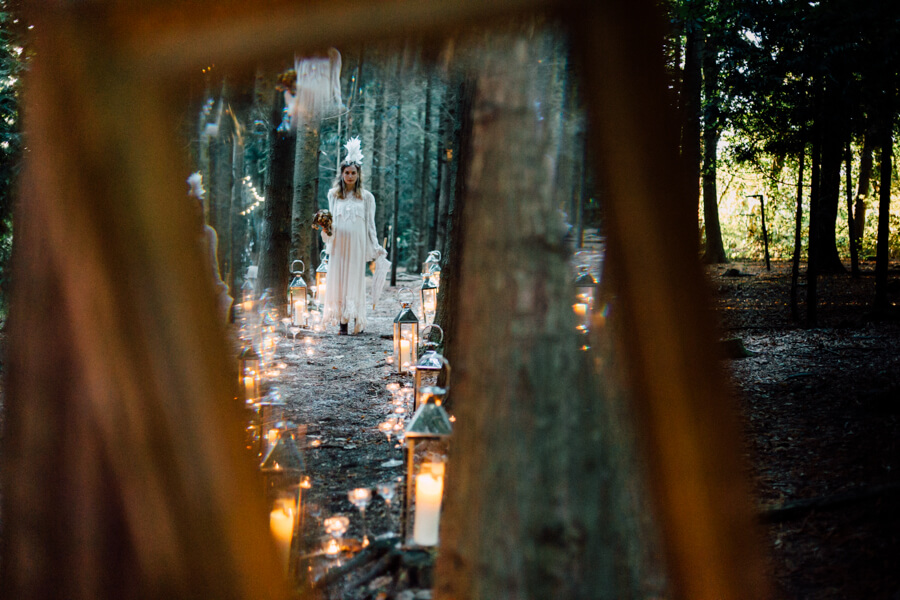 Halloween Party Inspiration! If you go down to the woods today…

Behind the scenes at our Halloween Woodland photoshoot.

Feeling that first crisp breeze, you know that summer is gone and autumn is in the air. Although, welcoming Autumn isn't with quite such trepidation as in younger days, as we say good bye to the long summer holidays, as adults, we seem more entuned to Autumn’s ways, and it has indeed a particular beauty to it.

It is also Autumn where Halloween, and all those modern traditions we associate with – dressing up, carving pumpkins - sweets! – unites all those who wish to join in.

Halloween is thought to have originated with the ancient Celtic festival of Samhain. The Celts, roaming Ireland, England and Northern France over 2000 years ago, celebrated new year on November 1st, and for a people who knew and braced the harsh realities of Winter, this day marked end of Summer and with it, colder, harder nights.

The Celts believed that on the night before the new year, the 31st October, the boundary between the worlds of the living and the dead became blurred, and the ghosts of the dead returned to earth.

Over two millennia later, the Halloween holiday has transitioned to a parade of costumes, sweets and merriment for adults and children alike. 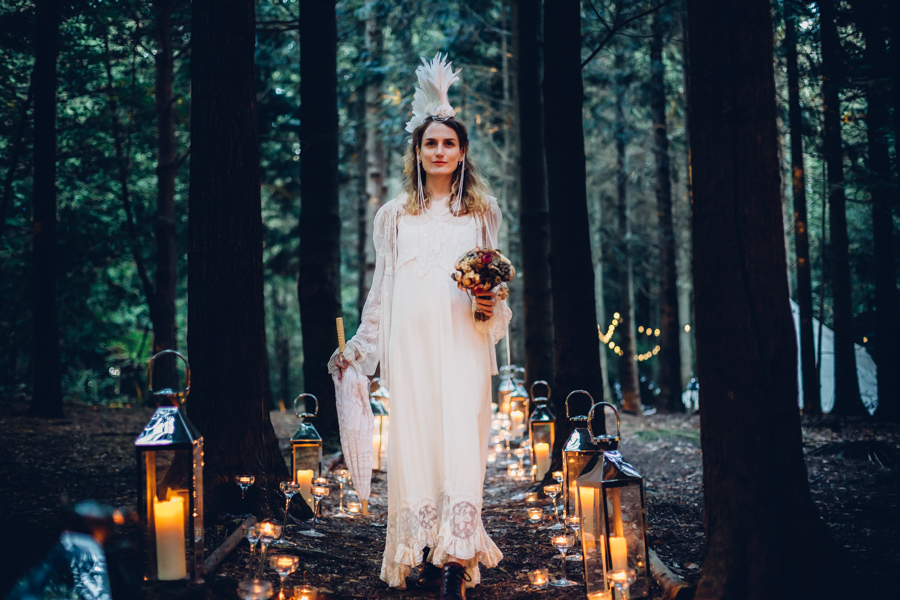 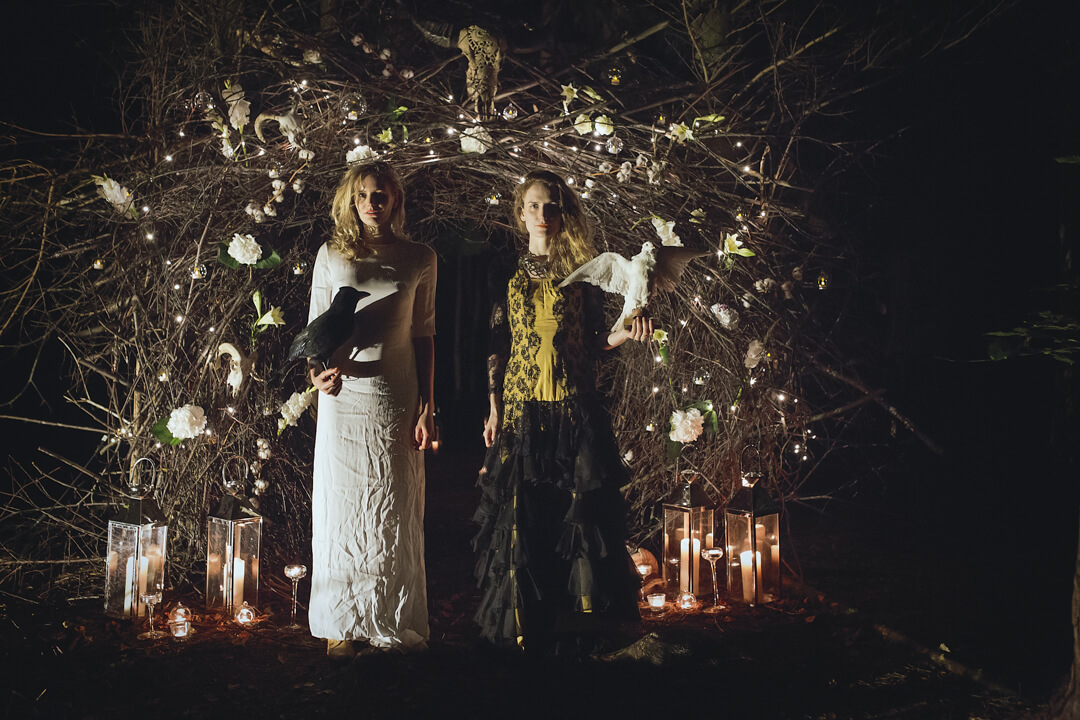 The Arabian Tent company took their own spin on the holiday, and as daylight was drawing to a close, our ‘woodland tea party’ photo shoot took place in 'Wilderness' woods, Hadlow Downs. Incorporating natural elements in the form of entwined branches, moss and leaves to form the entrance way, with lit candles, lanterns and cascading microlights to contrast the dark surroundings with light. 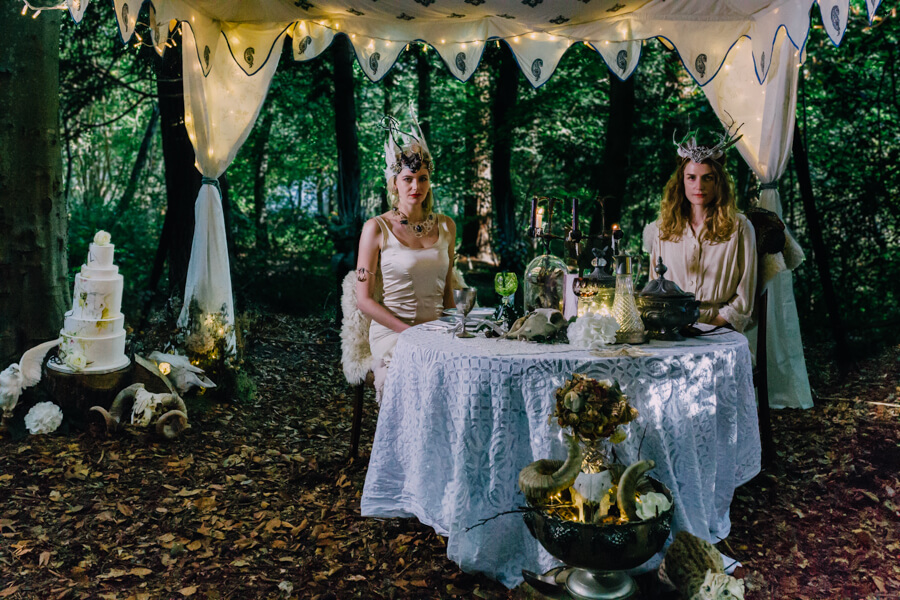 The Cornish Cream tent framed the tea party with micro lights, but opened so the woodland with the dimming light would set the scene.

LED white trees illuminate dark corners, or give an air of mysteriousness with their bright, leafy light blazing outside, making an ideal pathway decoration leading guests to the entrance of your Halloween party. 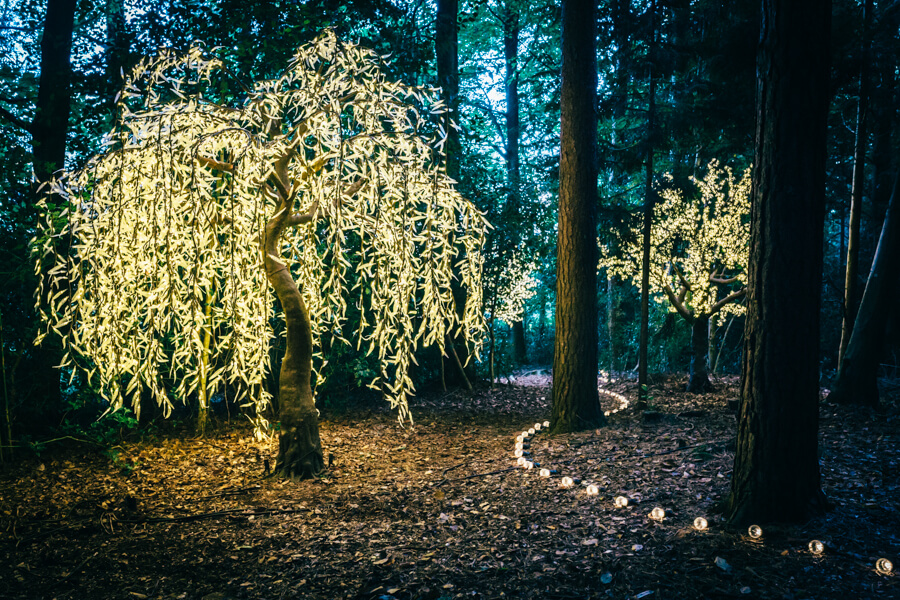 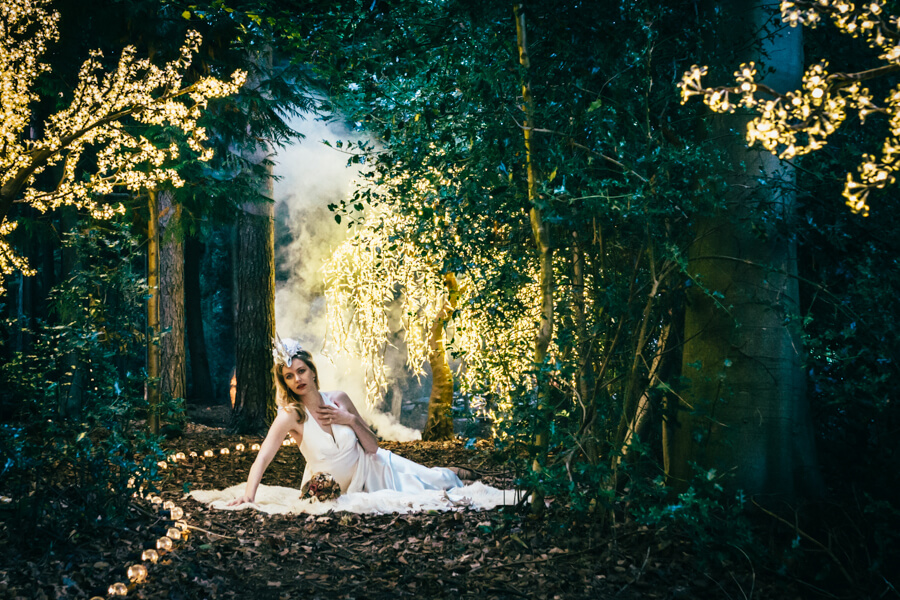 For the later shots, billowing smoke was blown, adding an air of mystique. This was used in the shot of one of our personal favourite chandelier, with giant filament bulbs glowing from copper wire, attached to a cage. For you Halloween party, we suggest a smoke machine to create a similar effect. 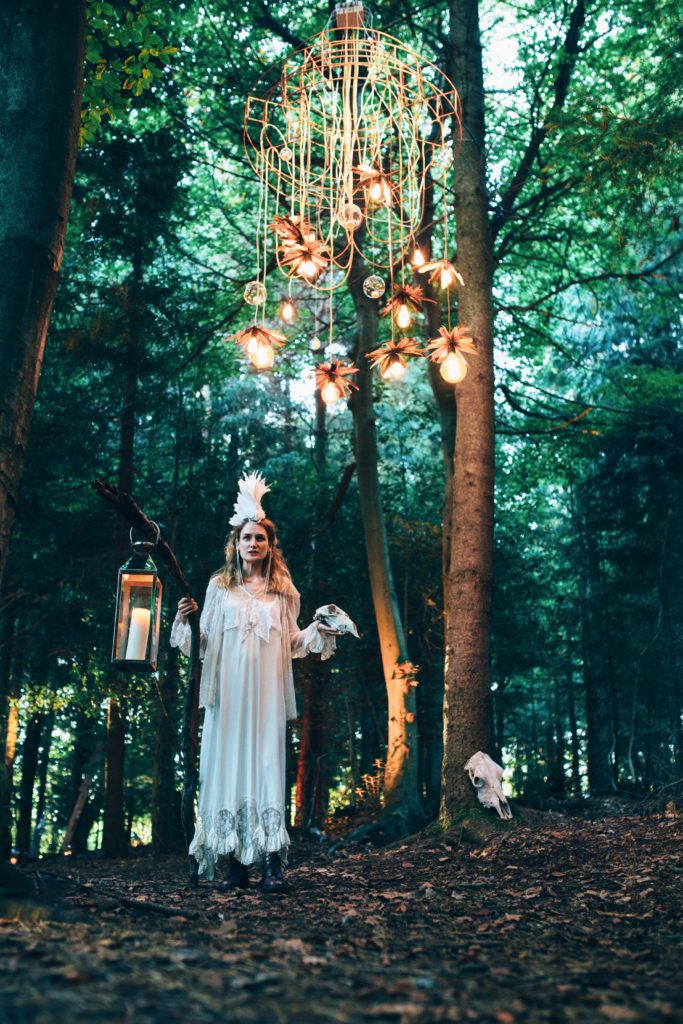 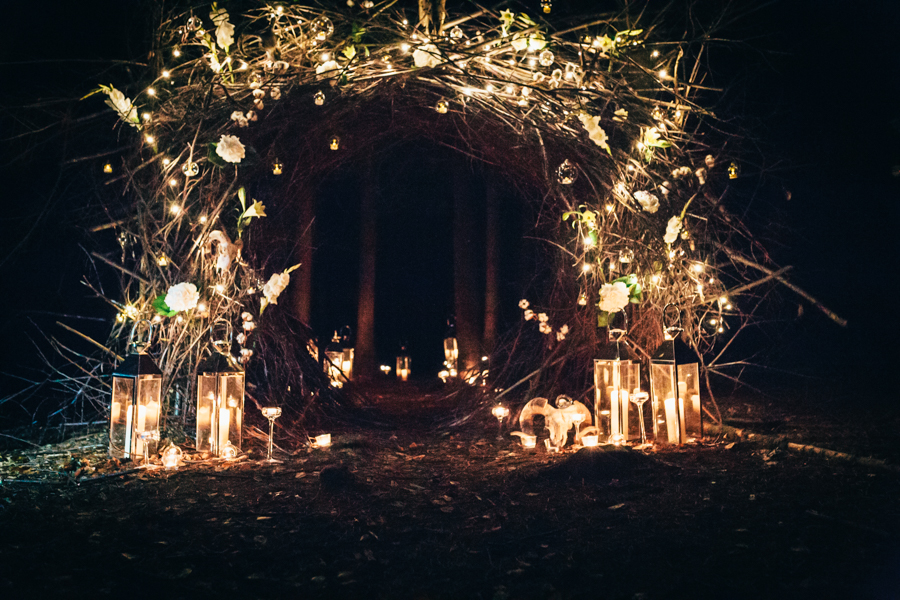 Lanterns, a myriad of candles, and cascading microlights and weaved into the branched entrance way. A perfect entrance way to entice your guests.

Contrasting the use of dark and white materials ensured you stray away from the usual ‘Halloween themes’ and style a Halloween party with a difference. For example, our Cornish Cream tent, dresses and table cloths contrasted with the dark candelabras, silver goblets and skull centrepieces. 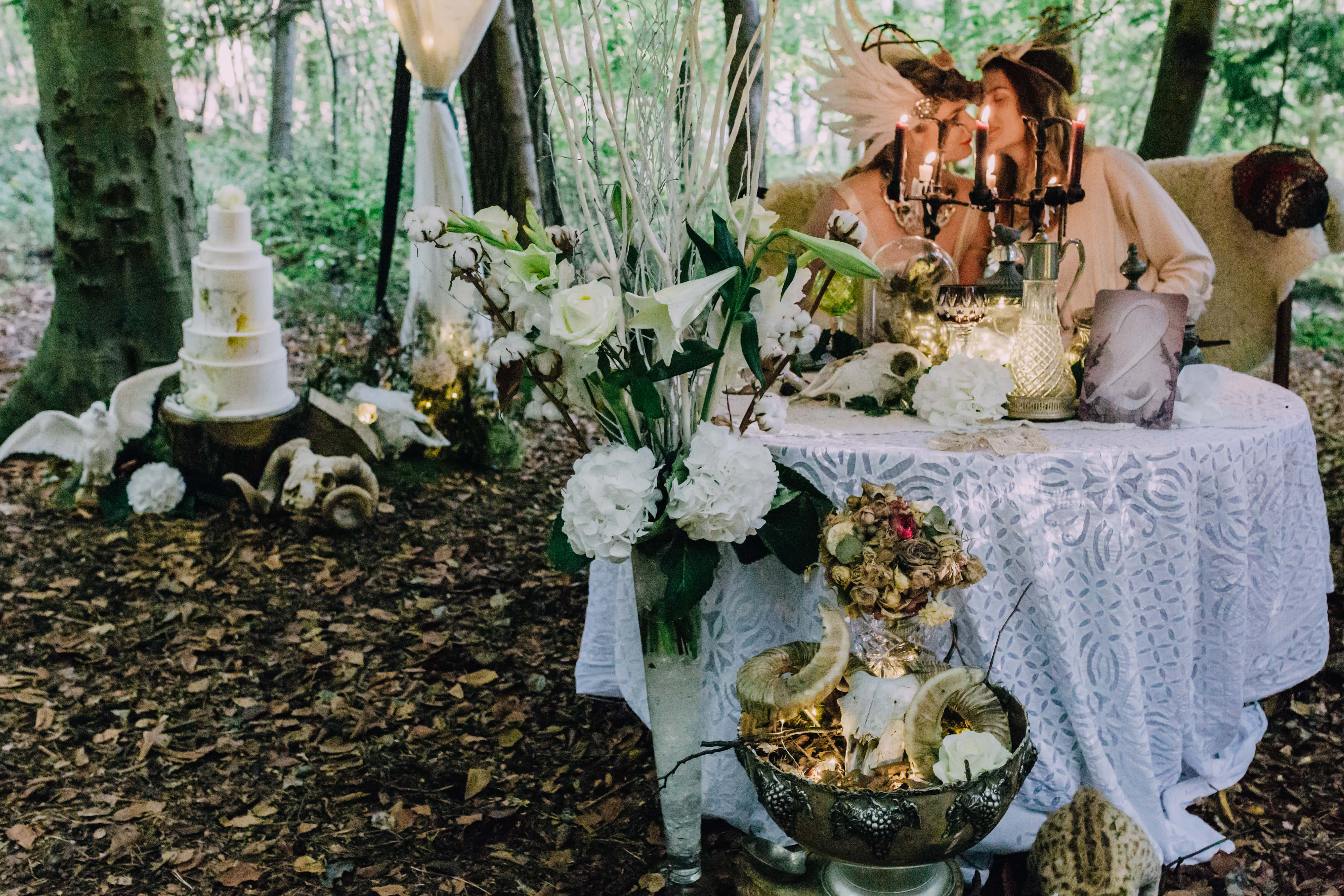 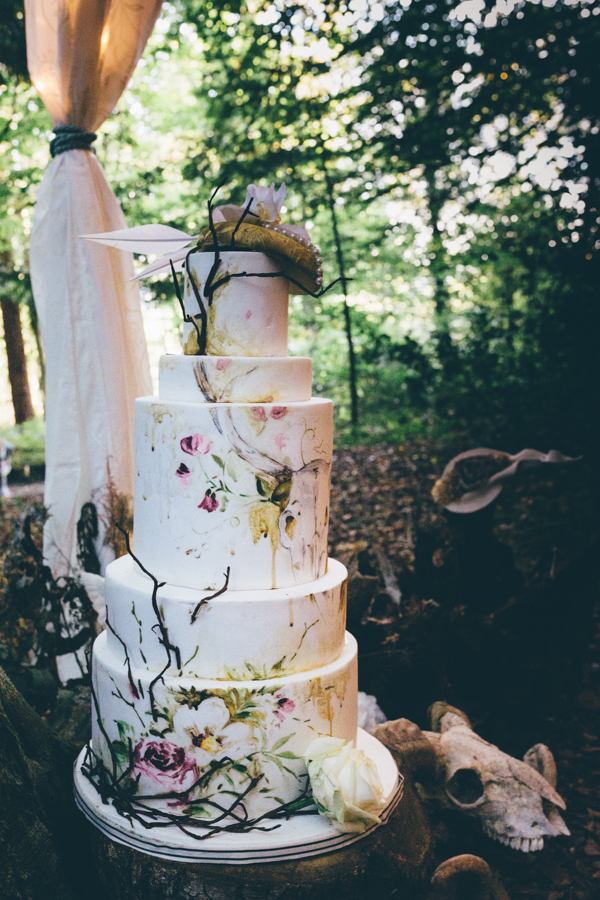 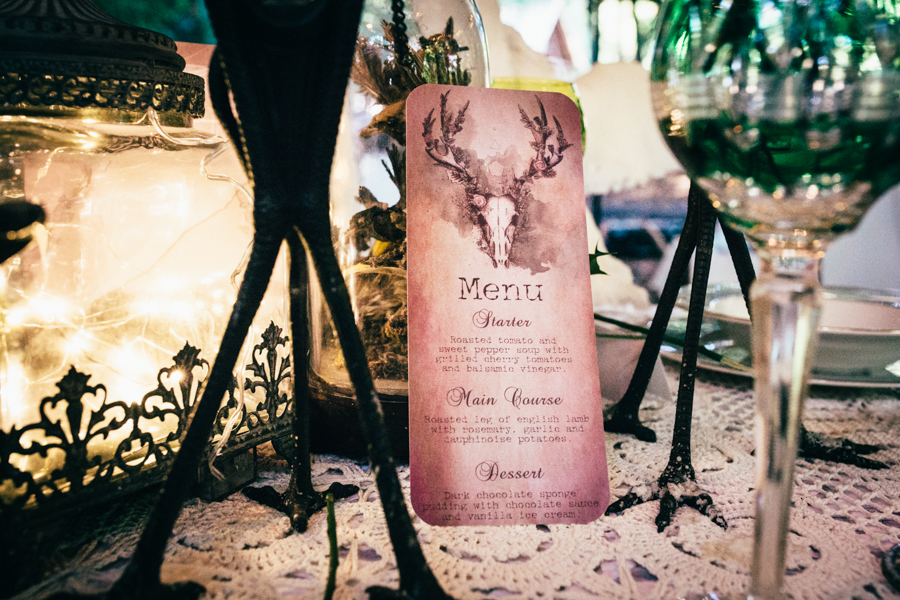 The menu, decorated with a stylistic deer skull ties in the overall theme, and adds the final touch. For any Halloween party, a strong invitation sent will signal that you mean business when throwing your party.

For the models, feathered head pieces were used, echoing the very old Celtic tradition wearing animal headwear and fur during their festival of Samhain. Perhaps add a head dress with an ethereal dress for your Halloween costume, and celebrate your Halloween party in style, with an air of mysteriousness. 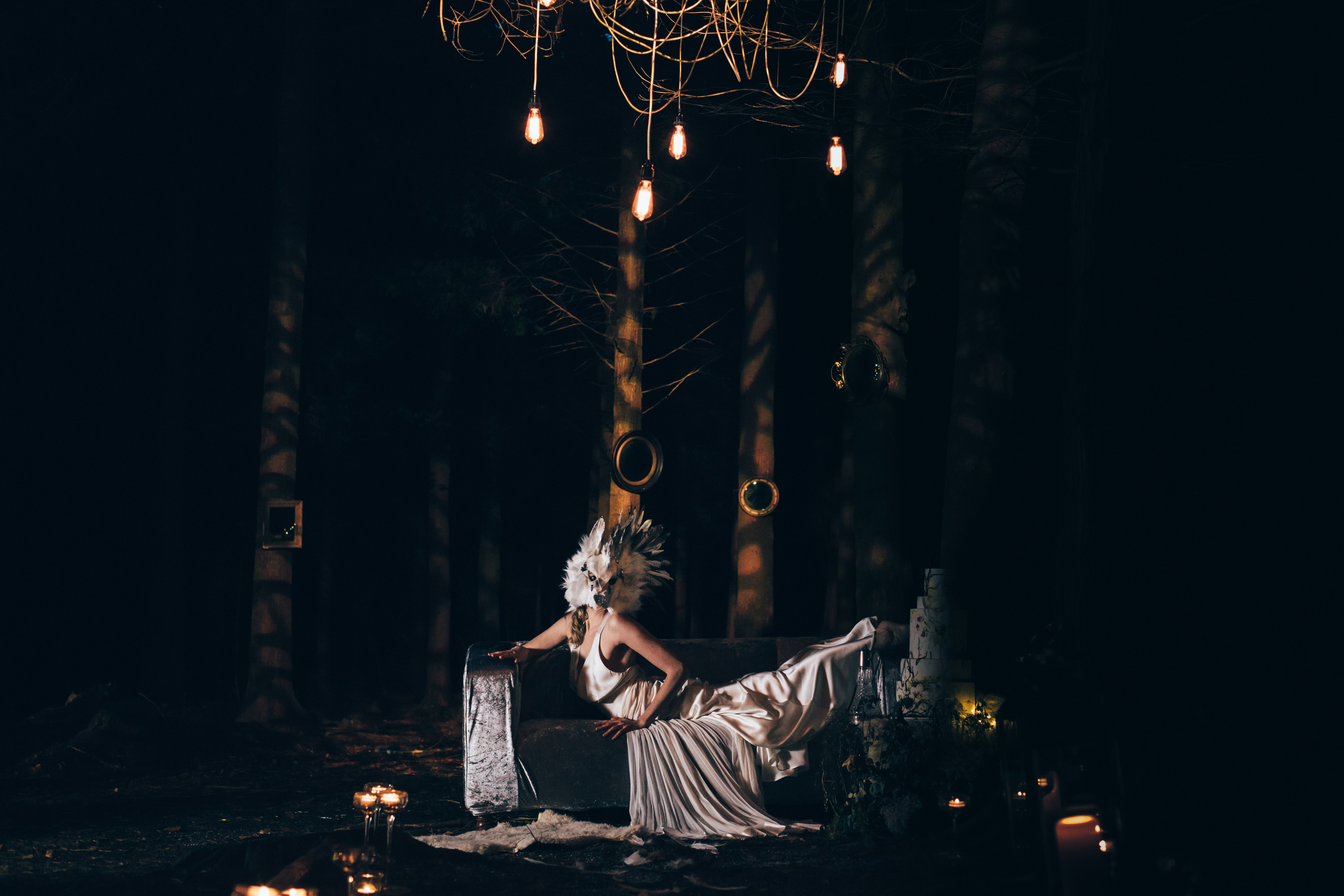 Thank you for the hard work and inspiration of everybody involved: